Volcanic rocks are spread around an area that got buried after the eruption of the Fuego volcano at San Miguel Los Lotes in Escuintla, Guatemala, June 6, 2018. (Photo: Carlos Jasso/Reuters) 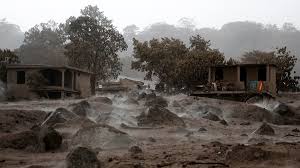 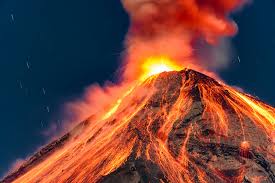 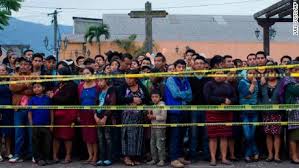 About 27 miles from Guatemala city, volcan Fuego erupted covering communities and killing at least 110 people. with over 200 still missing.  The Pyroclastic flow of lava, gases, boulders and ashes came down so suddenly, some were covered, still in their homes.

Guatemala city La Aurora airport was closed for cleanup for the next day,
and there was still ash in the air for several days.. It was tragic for several villages below where excavation was impossible.

Many families were lost and grieving the loss of loved ones.. One Guatemalan woman explained she and her two children were trapped with the volcanic mud was filling their home.. They called the father and told him goodbye as the rooms filled and became like cement.  they escaped to the bedroom as the next room filled to the ceiling, then watched in horror as the mud rose to the bed they were standing on .. all of a sudden it stopped, and they felt very blessed to receive only minor burns and smoke inhalation.

Most people cannot rebuild as the homes are now cement like mud, rocks and deep  volcanic ash.. But, neighbors are beginning to help neighbors and over 3,000 were evacuated to nearby churches and places set up to provide shelter, clean water, food and clothing.. Many stories of similar milagras, (miracles) happened where lives were spared and Guatemalans are pulling together,  as some communities were totally buried.

the Guatemala city airport was closed for a day to clean up ash from the runway.. Many volunteers helped clean and provide meals and water,  with the survivors located at Esquintla area.  So many grieving and devastated with their losses..

It makes us grateful for the Restoration of the gospel, knowing that whatever our path may be, and whatever storms or disasters lie ahead,  that we cannot live in fear, but with faith, knowing that our souls and our bodies resurrected and we will be able to live again eternally with loved ones, having faith in Christ as our Savior and Redeemer…

This is a text widget, which allows you to add text or HTML to your sidebar. You can use them to display text, links, images, HTML, or a combination of these. Edit them in the Widget section of the Customizer.